With Computerized Telescopes, you can find stars, planets, galaxies, and more at the press of a button.

Also known as GOTO or Computer-Controlled Telescopes, they are much easier to use for beginners and experienced users alike, and find amazing objects in space for you to view much quicker.

We have examined here the Best Computerized Telescopes in 2023 taking account of availability in this time of telescope shortages, and we recommend three of the best models for you.

See the quick links in the table below or read on for more detail. 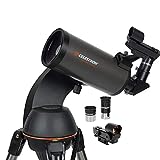 The Celestron Nexstar 90SLT is a compact computerized telescope that is perfect for those on a budget.

It is operated by a hand controller. With this you simply scroll through and select which sights are available to you in the night sky where you are located and the telescope moves to point at what you have selected.

You can see it (and others in the SLT range) in operation in this video from Celestron:

It is a Maksutov-Cassegrain (Catadioptric/Compound) telescope, if you’ve not heard those terms before don’t worry, all it means is that it is a small, light, compact – but quality – telescope.

It comes as a full package with the telescope, mount, tripod, and accessories including a finderscope and two eyepieces (25 mm and 9 mm).

The positives for this telescope are:

Overall, this is the perfect computerized telescope for beginners due to its ease of use. For this reason, it would also suit teenagers or even some younger children with supervision.

It is also perfect for those on a budget as it is probably the cheapest GOTO telescope available from a respected manufacturer.

Also available are the three other telescopes in the same Celestron SLT range. These are:

The number in the name refers to the aperture in millimeters, so you can see that these are all larger than the 90SLT above and so more powerful, but generally more expensive.

These are all great telescopes for beginners and in a similar price range. The 90, 102 and 127 are all pretty small and portable, but the 130 is bulkier – although the most powerful.

The Celestron NexStar 6SE is a great computerized telescope that works for beginners or intermediate users.

With this, you will be able to take advantage of GoTo technology to automatically locate planets, stars, and other objects at a press of a button from the database of 40,000 objects.

It is great for a beginner astronomer or just for someone keen to spend more time viewing and less time hunting those objects in space.

Like the model above, it is a compound telescope. Meaning it is compact, whilst offering great viewing capacity.

It has an aperture of 6-inches (that is the “6” in the name) and a focal length of 59 inches (1500 mm). In spite of it being very powerful, it also benefits from being smaller and easier to move and store.

It has an Alt-Azimuth mount, which is very easy to operate for observing the night sky and a separate piece of equipment (called an equatorial wedge) can be bought so that it can be used for astrophotography and taking photos of far off galaxies and other deep sky objects.

You can see it in action in this video here:

The reasons to want this telescope are:

Any downsides of this telescope are:

Also available are the same model telescope at different aperture specifications – check the prices for these telescopes at different retailers here:

The 4SE and 5SE are also great options for beginners in comparison to the SLT range covered above.

The 6SE and 8SE are better if you think you will venture into taking photos through your telescope (astrophotography) as they are compatible with the equatorial wedge for the mount that enables you to take long exposures.

This is something quite different from the above models and is the leading example of a new type of smart telescope that are disrupting the market.

The Stellina is the ultimate in easy-to-use telescopes – think the iPhone of telescopes. You literally unpack it, turn it on, and then you operate it from an app on your smartphone.

The bonus is that it has a camera built-in, which means it not only locates objects in space like a normal GOTO telescope, but it also takes pictures of them for you.

The reasons to want a Stellina are:

These are amazing inventions and we would say perfect for beginners, but the price would be prohibitive for most people and so we put it here as the best for those with the budget.

You can read more about the Stellina and similar alternatives in our article on the Best Smart Telescopes.

What are Auto Tracking Telescopes?

Computerized telescopes (also known as Auto Tracking, GoTo, computer-driven, computer-controlled telescopes) have the technology built in to locate planets, galaxies, and other objects for you at the press of a button.

This contrasts with a regular telescope where you need to locate the objects manually by operating the mount by hand and attempting to find what you want to see by using a star map.

What are the advantages of computerized telescopes?

What about the disadvantages of computerized telescopes?

Can you build your own computer-controlled telescope package?

When we talk about computerized vs manual telescopes, what we are really talking about is the mount system that comes with the telescope.

The telescope alone is sometimes referred to as an OTA (Optical Tube Assembly) and can always be used with either manual or GOTO mounts.

The mount is the equipment that sits between the tripod and the telescope (OTA) and allows it to move where it is pointing.

There are two main types of mount both of which can be computerized:

The Celestron Nexstar 90SLT and Nexstar 6SE both have Alt-Az mounts, which make them easy to operate for beginners (or anyone who wants it easier).

The 6SE can have an extra component added (called a wedge) that effectively turns it into an equatorial mount for the purposes of photographing the night sky.

The Stellina is different completely and is an all-in-one smart package.

Taking this into account then, you can of course buy a telescope and mount separately to build your own setup. See the Best Telescope Mounts for Astrophotography if you want to learn more.

How to choose a GoTo Telescope

Factors to consider when choosing a computer-controlled telescope are:

What’s the best computerized telescope under $500?

The Celestron Nexstar 90SLT is a great budget computerized telescope. See the review above.

Others in the Celestron SLT range can also be found for a similar price.

What’s the best computerized telescope for viewing the planets and moon?

For viewing the moon and planets of our solar system you would want to look at a telescope with a longer focal length.

For example, from the Celestron SLT range the 90SLT and 127SLT have much longer focal lengths than the other two models – see Celestron Nexstar: which model to buy? for a detailed breakdown.

A longer focal length indicates that it will zoom in more to a smaller field of view. This is perfect for viewing the moon and planets as they are relatively close to Earth in comparison to far-off galaxies, nebulae, and other deep space objects where higher aperture is the priority for good viewing.

What’s the most powerful computerized telescope?

Aperture is the best measure of power in a telescope and you can get computerized telescopes of 14-inch and 16-inch aperture from Celestron and Meade Instruments.

See The Most Powerful Telescopes You Can Buy for more information.

Are computerized telescopes good for children?

Yes, although probably only for children who are old enough to be able to take care of it.

See our article on the Best Telescopes for Kids for other options for different age ranges.

Can you connect a telescope to a computer?

Yes, with these telescopes you can bypass the hand controller and instead control it with software like Stellarium. You will just need the correct cable to connect it with.

Overall then, our recommendations are:

We hope these fit the bill for you and you can find a good option in stock. Others in the Celestron Nexstar SE and SLT range are also great.

You can find more articles like this in our Astronomy hub. To find the most high-powered telescopes, see the Best Telescopes.