What’s the most powerful telescope you can buy?

So we went on a quest to find the most powerful telescope you can buy.

What we found is that these range from very powerful but regular-sized telescopes, to the ridiculously large bigger-than-a-person model.

If you are a regular Joe just looking for the most powerful telescope you can buy to use at home, then go straight for the 16-inch Meade Instruments LX200 or alternatively the 14-inch Celestron CGX-L.

If you want to read about the man-sized behemoths and think you have somewhere to store one, then read on!

A word of note: none of the telescopes in this article are what any normal person would regard as “cheap”. In fact, they can range from the price of a vehicle to the price of a house. If you want to see some cheaper options, then check out the best telescopes for beginners and for intermediate users.

How to assess power? It’s all about aperture

The best indicator of the power of a telescope is its aperture.

Aperture is the measure of how wide the lens of the telescope is.

The wider (larger) the aperture, the more light it gathers, and the better images you will see (and photograph, if you wish).

These can work well for casual viewing and will allow you to see the planets of the solar system, other objects in the night sky, and but deep-sky objects like galaxies and nebulae may remain faint and hard to see.

Advanced telescopes from leading retail telescope manufacturers (Celestron, Meade Instruments etc.) will then range from 10 to 20-inch (250 – 500mm). These will give much-improved viewing and brighter, clearer images. You can see examples of these in the list below.

There are other factors that influence this though, and you will see from reading on that you can get higher aperture telescopes for less money if you are able to handle something that is less user-friendly and extremely large in size.

After this, there are specialist telescope brands and retailers who sell giant and customized telescopes wth apertures in the range of 50-60 inches. These can be huge and powerful and are generally more for the advanced telescope user.

See below for profiles of giant telescopes from companies like Obsession, Webster and New Moon. These are big beasts! There are some videos included below that you can watch to get a good idea of their size.

There is another, more complicated measure of a telescope’s power, known as its limiting magnitude. This is a measure of the farthest object that you will be able to see with a telescope.

See here for a calculator that enables you to work out this figure for any telescope. For the sake of simplicity, we stick to aperture as the best measure of power in this article.

The most powerful telescopes you can buy

My starting point for researching the most powerful telescopes was to look at the leading brands of everyday telescopes and find their highest-aperture models.

I think of these four brands as the leading telescope manufacturers:

There are other good manufacturers of “normal” telescopes, but these are the major, well-regarded and reliable players.

The most powerful models these companies sell are detailed below. They are best if you are not an advanced telescope user and are looking for something you can pick up pretty quickly and keep in your home.

The most powerful Celestron telescope is this 14-inch aperture CGX-L model.

Celestron are one of the most popular and reliable telescope manufacturers. They make a range of models that are perfect for users of any level – from beginner to advanced.

This is a Schmidt-Cassegrain telescope with in-built GoTo functionality.

This combines ease-of-use with power and could suit less-experienced telescope users that just want something they can set up and use relatively easily and quickly, whilst still offering amazing viewing experiences.

You can find more details about it here.

The largest aperture telescope from Meade Instruments is the LX200 and comes in at 16-inches.

Similar to the Celestron model above, it is relatively small and lightweight in terms of bulk. It is also a computerized/GoTo compound/catadioptric telescope that means it could be used by a beginner.

As mentioned at the start of this article, if you are a regular person looking for the highest-specification telescope you can use from home then this is your best bet.

Meade also offer a much more affordable 16-inch telescope in the Lightbridge 16 Plus telescope. The trade-off is that this is much bigger in terms of bulk and weight so will not suit people who lack the storage space, and it is a manual telescope, meaning it lacks the GoTo functionality to find objects in the sky at the press of a button.

This is a good example to illustrate the price difference between telescopes with the same aperture (power) but different types that suit different users. The LX200 could be picked up and used by near enough anyone with a bit of effort, the Lightbridge will only be able to be used by someone who already knows what they are doing. 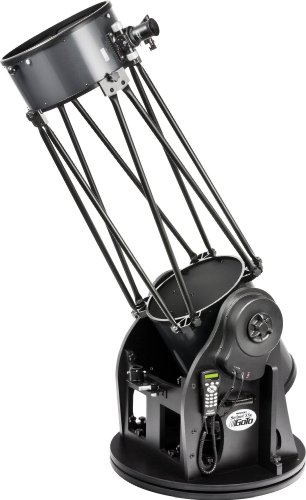 The most powerful Orion telescope is this 16-inch aperture SkyQuest model.

You’ll notice that it is different in appearance from the Celestron and Meade models above and that is because they are what are called compound or catadioptric telescopes. They tend to be powerful but smaller in size. The trade-off is that they tend to cost more. (see more explanation about this here – https://skiesandscopes.com/beginners-telescope/)

The Orion SkyQuest is a Dobsonian telescope and stands at about 6 foot (or 1.8 meters) tall. This is not on a tripod but standing on the ground! As you can work out then, this is a giant telescope that you might need to consider how you store at home.

Given its size then, this is more one that you will have to ensure that you know how you will use it and when. In contrast, the telescopes above are more compatible for grab-and-go use in your backyard or from a balcony or other viewing point).

This will normally be the cheapest option on this list (although prices can always vary). This discount versus the Meade and Celestron model above is effectively the trade-off for the size difference and lack of GoTo functionality.

There’s a helpful picture here of it dismantled and put into a car boot: 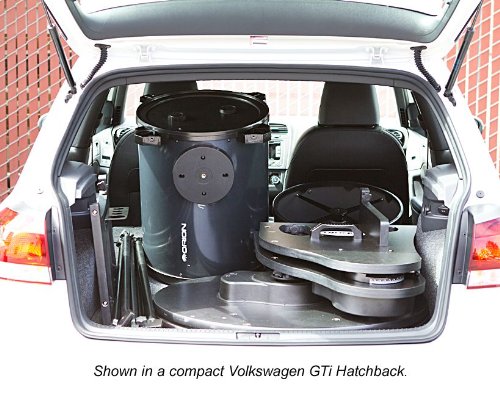 and here you can see how tall it stands: 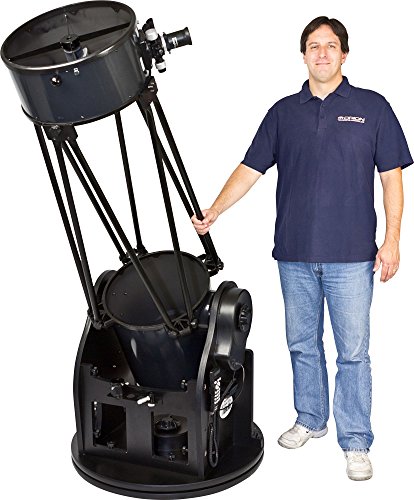 Sky-Watcher’s most powerful model is this 20-inch aperture StarGate telescope.

Like the Orion telescope above, this is a large Dobsonian more suited to advanced astronomers who are going to use it at events like star parties. It weighs in at over 90kg and stands taller than most people. There’s a video here of it being constructed:

Sky-Watcher do also offer a much less bulky 16-inch collapsible GoTo telescope that is similar to the Orion model above. With this you sacrifice 4-inches of aperture compared to the 20-inch StarGate model, but you get something much smaller, lighter and easier to use. 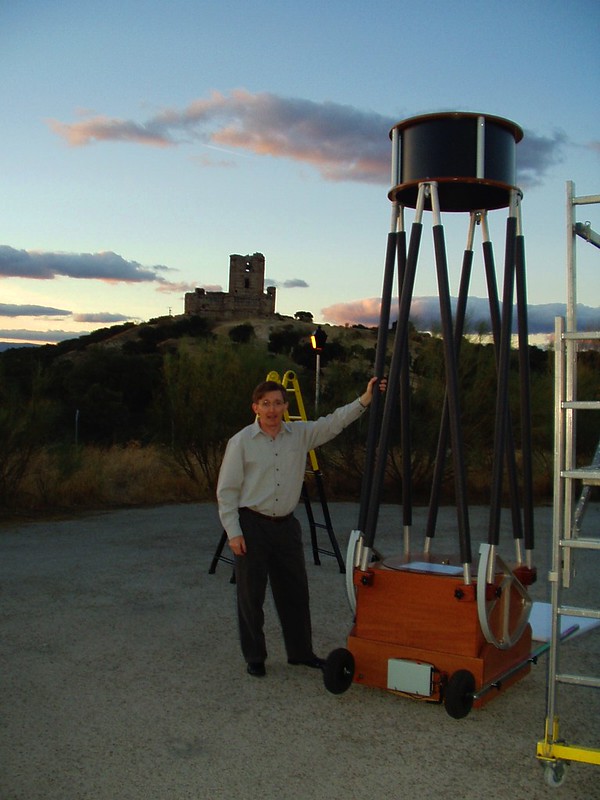 We now move on to to the specialist telescope manufacturers.

The first that we come across is the 25-inch aperture Classic Dobsonian from manufacturer Obsession. These are custom-built for buyers and will set you back in the region of $19,995.

These large Dobsonian telescopes start to get pretty massive in terms of height and bulk. Some of them require the user of ladders to look through the eyepiece.

Even bigger is this 32-inch aperture telescope from Webster. It stands 118-inches (299cm) tall, although Webster boast that it can be easily moved about by one person.

It is on wheels and, when tilted, it can slide through doorways, thereby suiting storage in a garage.

We spoke to Webster and they say that in recent years they have built 53-inch and 40-inch aperture telescopes for customers and that they can build anything up to 60-inches.

They also informed me that they once heard about a 73-inch aperture telescope being built in New Mexico but don’t know if it was ever finished!

Here’s a picture of a 28-inch Webster telescope:

Next up is this 40-inch (1 meter) aperture telescope from Planewave.

This is a bit different as it is designed for use in an observatory and not for home use.

In the video below you can see the documented process of installing one of these telescopes in an observatory in Chile:

We now get to the 50-inch “Big Guy” telescope from New Moon.

Again, these are huge constructions and one of these will set you back a cool $155k.

Lastly, the biggest telescope we could find was this 65-inch aperture model from Canadian manufacturer Optiques Fullum.

Here’s a video showing the installation of one of their 50-inch models:

In summary, you can have more user-friendly and compact telescopes like the Meade LX200 or the Celestron CGX-L which you can keep in your home, or you can get much larger Dobsonian telescopes.

With the Dobsonians, you will need a garage or somewhere similar to store them as they are man-sized and these will not suit the casual user.

If you really want a huge specialist telescope, then do some good research into the size, portability and think about how you will use it. It’ll probably be worth it – some of these telescopes cost as much as a house, so obviously be sure about what you are doing.

Below is a comparison table in order of aperture of the telescopes featured in this article. Remember though that the first two are substantially smaller, lighter and less bulky than the rest:

Overall, the highest we could find was the 65-inch aperture telescope from Optiques Fullum, but we heard rumors of a 73-inch telescope that we couldn’t confirm!

We hope that you found this research interesting. Let us know your thoughts in the comments.

Have we missed any models that should go in this list?

Have you come across any telescopes even bigger than these?