We analyzed 685 images shortlisted for the Astronomy Photographer of the Year competition in the past five years to find the Best ZWO Planetary and Deep-Sky cameras.

From our data, we found that the ZWO ASI174MM is the best ZWO planetary camera: It is an uncooled, monochrome CMOS camera with a 2.3MP resolution and a fast frame rate of 164 fps at full resolution that is tailored for planetary, lunar, and solar imaging.

What you need in a dedicated planetary camera is a fast frame rate, plus a modest resolution and USB 3.0 connection so that the data transfer to your laptop/computer can handle the volume of frames being taken.

Our results show that this camera delivers for planetary imaging and is relatively cheap.

We also found that the ZWO ASI160MM Pro is the best ZWO deep-sky camera:

It is a cooled, monochrome CMOS camera with a 16MP resolution and a frame rate of 23 fps.

Deep sky cameras need a higher resolution for more image detail, but a slower frame rate since they will use less numerous but longer exposures. The cooling reduces noise.

Read on to see our full results analysis, to understand more about the differences between ZWO camera models, and how to choose what is right for you. 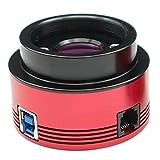 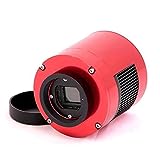 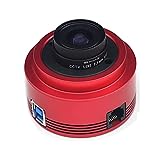 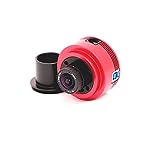 The Astronomy Photographer of the Year contest is the world’s leading astrophotography competition. Each year hundreds of images are shortlisted along with details of how the picture was captured, including the camera used.

In the past three years, there have been a total of 685 images shortlisted, and from these 304 used dedicated CCD or CMOS astronomy cameras.

From this data, we can see that ZWO is by far the most successful dedicated astronomy camera brand:

Now let’s look at the most successful individual models.

In this chart, you can see all the ZWO cameras that have been used in shortlisted images for the Astronomy Photographer of the Year competition in the past five years:

But now we can split this data so that we can see the best ZWO cameras for planetary imaging, and then for deep sky imaging.

We can see that the ZWO ASI174MM is the top ZWO camera for planetary imaging:

It is an uncooled, monochrome CMOS camera with a 2.3MP resolution and a fast frame rate of 164 fps at full resolution.

The next most successful models are the:

These cameras are both relatively cheap and so make great options for beginners.

Next, we can look at the ZWO cameras used for imaging deep-sky objects:

We see that the ASI1600MM Pro is by far the most successful ZWO deep-sky camera:

It is a cooled, monochrome CMOS camera with a 16MP resolution and a frame rate of 23 fps.

The second most successful ZWO deep-sky camera is the ZWO ASI6200MM Pro.

This is also a cooled, monochrome model but with an extremely high 64MP resolution.

You may have noted the key differences between what make the best planetary and deep-sky cameras:

The newer model has:

Essentially the ASI2600MM Pro is a better DSO imaging camera than the ASI1600MM Pro, however, it is heavier and significantly more expensive.

Therefore for most people, it will likely come down to budget as to which one to go for.

It should also be noted though that its higher resolution and lower frame rate do not make it ideal for lunar or solar imaging and there are better (and cheaper) cameras for this, like the ASI174MM.

You can watch a video that discusses this comparison here:

What do the names of ZWO camera models mean?

The naming convention of ZWO cameras is as follows:

How many different ZWO camera models are there?

There are currently 35 different ZWO camera models available (with the year of release in brackets):

There are a few things to know if considering whether to get a color or mono ZWO camera:

Using a monochrome camera is more difficult and expensive, but has a much higher potential for producing images.

Color cameras are much quicker and simpler, but the images produced will be more limited. This can be perfect for beginners though who are looking to do their first imaging with a dedicated astronomy camera.

What telescopes are used with ZWO cameras?

Our results show that planetary imaging with ZWO cameras is most commonly done with telescopes from:

The most successful models are Celestron Schmidt-Cassegrain OTAs – see the full data in the Best Telescopes For Planetary Imaging.

For deep sky imaging with ZWO cameras, we see the most successful telescope brands to be:

Where are ZWO cameras made?

ZWO are based in China. Specifically the city of Suzhou in Jiangsu province.

Where can I get ZWO camera drivers?

All drivers for ZWO cameras can be downloaded from the ZWO website.

Our results indicate that ZWO outperforms all other manufacturers of CCD and CMOS cameras.

However, these results should take into context price and availability, since a budget ZWO camera of a few hundred dollars will likely not be “better” than a premium QHY CCD model of a few thousand dollars, but a lot more people will own the ZWO model and so there will be more images produced with that camera.

The ASI178MC is the best ZWO camera for EAA (Electronically Assisted Astronomy).

If you want to read more about this, see our guide to Electronically Assisted Astronomy.

What are the other good astronomy cameras?

If you want to consider more than just ZWO cameras, then see our articles:

Overall, based on our findings we recommend for ZWO planetary cameras:

For ZWO DSO cameras, we recommend:

Please let us know if you have any comments or questions in the comments below.