Pentax is one of the leading manufacturers of photography equipment, but what is the best Pentax camera for astrophotography?

In this article, we dig into what models are best and investigate Pentax’s Astrotracer functionality.

Keep reading to find out why.

*This website sometimes makes money through affiliate commissions. This means we may be compensated if you click links on our site at no extra cost to you. 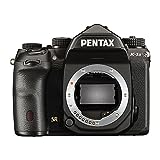 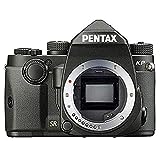 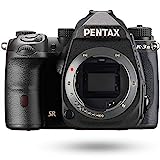 Below we examine four different Pentax models and their suitability for astrophotography:

The Pentax K-1 Mark II is their flagship full-frame DSLR and was released in 2018. We regard it as the best Pentax camera for astrophotography.

This camera is one of the few DLSR available from any manufacturer that has dedicated astrophotography modes available. In particular, its built-in GPS enables its Astrotracer functionality. You can read more about Astrotracer below but essentially it allows you to take much longer exposures of the night sky without getting star trails and replacing the need to add an external star tracker.

In addition, another internal function available on the camera is its Starstream mode. This creates 4K timelapse videos of the night sky that require very little, if any, editing or post-processing.

The camera is also weatherproof, which is a great advantage given that for astrophotography you often need to travel to locations with less light pollution away from cities and the rain and the elements may catch you out.

It has a night mode on its screen so that you can use it without ruining your night vision and it has lights inside the camera to help you operate at night (for example, in the card slot).

Another bonus for the astrophotographer is the fully articulating screen which can be really helpful for composing shots at night at awkward angles.

In summary, this is a great DSLR for astrophotography and, we believe, the best option from Pentax’s range.

The Pentax K-70 is a great beginners’ camera for astrophotography and a real bargain.

One of the main features that distinguishes it from entry-level equivilants from Nikon or Canon is that it is weather-proof, and so tailored for outdoor photography.

Other great pros of this camera are:

It does not have in-built GPS, which means that the Astrotracer function is not available as standard, but you can add the Pentax O-GPS1 unit to give it this functionality.

In short, the K-70 is about as good as it gets for entry-level crop sensor DSLRs for astrophotography and can be a real bargain.

Check prices for the Pentax K-70

Other Pentax cameras for astrophotography

We recommend those two cameras above as your best Pentax astrophotography cameras but we also just wanted to touch on two other models in the market:

The Pentax KP is very similar in many ways to the K-70:

However, it generally costs twice as much as a K-70 and there seem to be few advantages of the KP over the K-70. One thing is an improved autofocus, but this is not something you will use for astrophotography as you will always be manually focusing. This may be a positive though if you plan to use the camera for other day-to-day photography.

There are some advantages of the K-70 over the KP though:

In short, for astrophotography there is little the KP can do better than the K-70 and so we would regard the K-70 as better value.

There is a good video here that gives a brief overview of the K-1 Mark II, the K-70, and the KP for astrophotography:

The last model that we wanted to touch on was the brand new Pentax K-3 Mark III, which was released in mid-2021.

It is branded as Pentax’s “flagship” crop sensor camera (with the K-1 Mark II as the flagship full-frame model). Again though it is very similar in terms of the key specifications to the K-70 and KP:

It does have some advantages over these other models, in particular:

The major downside though is the cost. At the time of writing it was retailing for about the same price as the full-frame K-1 Mark II.

In our opinion for this money (and with our astrophotography hats on), most people would be better off going for either a much cheaper K-70 and adding the external GPS unit for Astrotracer functionality, or going straight for the full-frame K-1 Mark II.

What is Pentax Astrotracer?

A number of Pentax models have a mode that can be used called Astrotracer. What this does is shift the sensor inside the camera so it adjusts to compensate for the rotation of the Earth when shooting.

This is a major thing for astrophotography as you generally want to shoot for as long as possible to capture as much light as you can, but are limited on how long you can do this by the rotation of the earth as the stars begin to lose their sharpness and start to trail after a certain amount of time (depending on what camera and lens focal length you are using).

Therefore Astrotracer allows longer exposures without star trails and increases the chances of getting great shots without needing to take multiple shots and stack them in post-processing.

This is essentially what a separate piece of equipment known as a star tracker does, but the astrotracer functionality builds a version of this into the camera and so makes having this extra piece of equipment between your tripod and camera unnecessary.

Here is a video from one Cuiv the Lazy Geek (one of the best astrophotography YouTubers) that gives a good overview of the astrotracer functionality:

Which Pentax cameras have Astrotracer?

The Pentax camera models which have the astrotracer functionality in-built are the:

This is because these are the models that have in-built GPS units.

For other Pentax models, you can add the Astrotracer functionality by buying the separate Pentax O-GPS1 Unit that attaches to the top of your camera.

Some more information on the O-GPS1 Unit can be found on Ricoh’s site.

There are a number of advantages to using in-built Astrotracer versus using an external star tracker:

There’s a good overview of this translated from Japanese on Pentax’s site.

In summary, we believe that:

Both of these cameras are weather-sealed, rugged, and tough, articulating screens. They also have good lens options for astrophotography.

Whilst the Pentax KP and Pentax K3 Mark III are great cameras, we see little to recommend them (for astrophotography) above these two models above.

We hope you found this overview useful. Let us know in the comments below if you have any questions or thoughts on this.

4 thoughts on “What is the Best Pentax Camera for Astrophotography? (2023)”