Using an intervalometer can be a great and cheap way to give you the remote control of your camera that you need for astrophotography, timelapse photography, self-portraits, and anything else.

We recommend the Pixel TW-283 as the best intervalometer, giving all the control you need for good value. There are different versions depending on your camera’s make and model.

We also suggest some alternative options for Canon, Nikon, and Sony cameras and dig into how to use them to get the most from your camera. 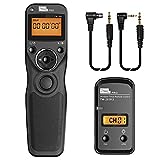 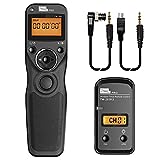 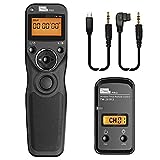 The Pixel TW-283 is the best intervalometer giving you all you need in a programable remote release and timer for your Canon, Nikon, or Sony Camera.

There are a number of different models that work for different cameras:

You can also find the right model to work with Pentax, Fujifilm, Olympus, and Panasonic cameras. Check the Amazon listing page to see all possible cameras you can use with each version.

It has a number of different modes, including:

If there are any grumbles about this tool, it’s just that it can’t be turned off – instead, it shuts off on its own when not used for a while. This hasn’t proved a problem for me as the battery life has persisted for a long time despite this. Also, this can be a bonus as you don’t want any of your gear to drain its batteries by accidentally being knocked on in your camera bag.

It features two main components – a transmitter and a receiver. The receiver needs to be attached to the camera when using it wirelessly.

All in all, this is a great intervalometer that can be found for most cameras out there on the market. Check the buttons below for the most popular options.

Note that with some packages it is sold with multiple cables – for example, the DC0 for Nikon vs the DC0/DC2 for Nikon, or the S1 vs S2 for Sony. If you don’t need this you may be able to save yourself a little money by choosing the cheaper option as this is the only difference (just check which version is compatible with your camera model).

There are some other good options for those with Canon cameras. See the three selected below.

Just check that the connection should be compatible with your specific Canon model: 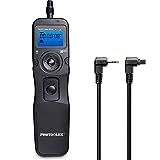 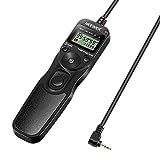 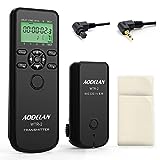 Other Nikon Camera intervalometer options are laid out below.

Just check that the connection should be compatible with your specific Nikon camera model: 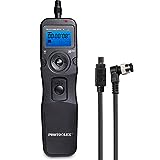 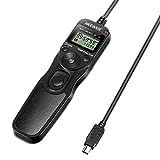 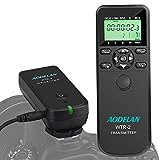 Some alternative intervalometers for Sony cameras are shared here.

There are some other options that should all work great: 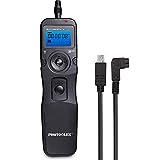 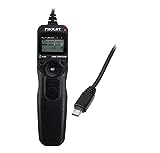 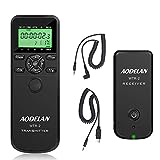 For astrophotography, an intervalometer is an essential part of your gear setup.

Your camera may have an internal intervalometer (see more on this below), but these are usually fairly hard to navigate compared to the best models recommended in this article. They also give you that remote control so you can click the shutter release button without putting vibrations through your camera and ruining your image from the very start.

The main reason why using an intervalometer is important for astrophotography is that a common technique for shooting the stars and deep-sky objects is to take multiple long-exposure pictures of the same composition in succession. You can then “stack” the photos in post-production and combine them to create one single (much better) image.

This is important since you are capturing images of faint objects in low light and you are limited in how long you can have your exposure time as after a certain amount of time the stars will start to trail and lose their sharpness.

The custom programmability from the intervalometer will enable either to be done.

You can even create astrophotography time-lapse clips. Here’s a great video from a friend of Skies & Scopes Michael Ver Spill (“Milky Way Mike”) on how he used an external intervalometer to do just this:

What cameras have in-built intervalometers?

Many cameras have intervalometers in-built and you may prefer to take advantage of this over buying a new external piece of gear.

The best list I can find of cameras with built-in intervalometers is this on the Lonely Speck website. It is from this where we have got this info below and full credit to them for attempting to keep it up-to-date:

They do not have the capacity to program the camera’s settings via the remote controller.

However, they are cheap and work great if you just want a simple wireless remote to press the button without moving your camera.

Here are two example models for Nikon and Canon cameras: 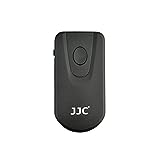 How to use an intervalometer?

For the most part, it will be a matter of exploring the different modes and making it work for whatever photography you are doing.

As noted above, for astrophotography or time-lapse photography you are most likely to be a timer-schedule or delay mode that allows you to program your desired settings for multiple captures and then let it run.

Here’s a good general overview of using an intervalometer:

What are the Best Intervalometer Apps?

One other thing to consider is that there are smartphone apps that you can use to connect to your camera and have control like an intervalometer.

Some of the options are:

See also the Best Apps for Astrophotography for more suggestions.

Over to you – What’s the Best Intervalometer for Astrophotography?

Overall then, we recommend the Pixel TW-283 as the best intervalometer for Nikon, Sony, Canon, and other cameras. It does all you need at a good value price and has multiple versions to work for pretty much any camera.

There are more budget options if you want to look at the alternatives listed above, or you could look into using your camera’s internal intervalometer (if it has one) or using one of the apps noted above and operating your DSLR or mirrorless camera from your smartphone.

We hope you found this useful. Let us know your favorite intervalometer in the comments below and check out our Astrophotography hub for more guides and cases studies.