A barlow lens is a cost-effective accessory that increases the magnification of your telescope, and it combines with your eyepieces to effectively double your viewing options.

We recommend here the Best Barlow Lenses and examine their pros and cons.

See the table below for quick links, or reason for more information. 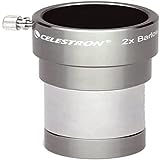 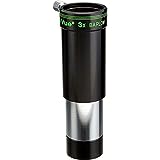 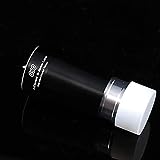 This is a high-quality and good value barlow lens from Celestron.

It fits 1.25″ eyepiece barrels and provides 2x magnification for any eyepiece used.

It can also be bought as a 3x barlow lens.

This is the budget range of Celestron barlow lenses that have slightly less high-quality coated optics but are still extremely popular.

The Luminos is the premium range of Celestron barlow lenses and this is great for those looking for 2.5X to fit 2-inch eyepiece barrels, however it comes with an adapter so that it connects to 1.25-inch eyepieces as well.

Televue is possibly the most respected manufacturer of eyepieces and barlow lenses by experienced astronomers.

This is a 3x barlow that will fit virtually any telescope.

This 5x barlow lens from TPO is highly-rated if you are looking for something to add that much magnification to your telescope.

Note that TPO gear can also be bought under the GSO brand, as they are the same but just branded differently for different markets.

What is a Barlow Lens?

A barlow lens is a type of lens that artificially increases the focal length of the telescope.

It fits between the eyepiece and the telescope and multiplies the magnification. This can be double magnification for a 2x barlow lens, triple for a 3x, and so on.

The magnification of a telescope can be calculated by taking the telescope’s focal length and dividing it by the eyepiece focal length. For example:

As you can see, the shorter the eyepiece focal length, the higher the magnification.

By adding a barlow lens to use with these eyepieces you can effectively double your options. So if you have 40mm and 13mm eyepieces, you can insert a 2x barlow and effectively also have 20mm and 7.5mm eyepieces.

Here is a great and short video from Celestron that gives a good overview of what a barlow lens is and how it works.

Pros and Cons of Barlow Lenses

The advantages of using a barlow lens are:

The disadvantages of using a barlow lens are:

What barlow lens is right for me?

There are three things to note when buying a barlow lens:

Here’s a good video from Orion that talks about all this:

For example, the Celestron NexStar Evolution 8 telescope has:

Therefore in this case, using the 3x with the 13mm eyepiece would be overkill and exceed the theoretical limit of the telescope and therefore not be worth it as the views would be poor quality. Therefore a 2x would make more sense.

In another example, a Celestron StarSense Explorer DX 130AZ has:

Therefore, in this case, using a 3x barlow would be within the limit of the telescope and eyepieces and therefore may make as much sense as a 2x.

How to use a barlow lens?

You can use a barlow lens in two ways:

The difference is the magnification is effectively increased further with the second technique.

Note, this only works with refractors and catadioptric telescopes, not reflectors.

No, higher magnification is not always better. It will zoom you in more to what you are looking at but it will not make it brighter or clearer, in fact with a barlow, it will likely degrade the view slightly (although this may not be noticeable).

Your telescope’s aperture is the best indicator of how good the views it will provide are.

Related to this, each telescope has its own theoretical limit. This is the point at which it will no longer be beneficial to increase the magnification as the image will degrade.

This is easily calculated by taking your telescope’s aperture in millimeters and doubling it. Therefore:

You should use this calculation when buying a barlow lens to help you decide what is best for you, as there is no point in exceeding the theoretical limit.

What is the barlow lens used for?

A barlow lens is used with a telescope to combine with the eyepiece to increase the magnification of the view.

When would you use a barlow lens?

Barlow lenses are particularly useful in lunar and planetary viewing when increased magnification will get you much closer to what you are viewing and where narrower fields of view are more beneficial.

In relation to this, see also the Best Planetary, Lunar & Solar Cameras.

Is a barlow lens worth it?

Yes, barlow lenses are relatively cheap and give you more versatility when observing. If you have three different eyepieces at different focal lengths, then adding a barlow will effectively increase this to six.

You therefore have more ways of finding the best focal length and magnification for what you are viewing in the night sky on any night.

Why are barlow lenses blurry?

When using a barlow lens, you are adding more glass and layers for the light to pass through and so there is some degradation.

Also, when it doubles or triples the magnification it also doubles or triples any turbulence in the air and so can produce blurry views. This is especially so if you exceed the theoretical limit of your telescope’s aperture (see above).

Can you use a barlow lens for astrophotography?

Yes, you can use a Barlow Lens for astrophotography, but this will be best for photographing the moon and planets of our solar system where higher focal length and magnification are positive.

In comparison, deep sky objects like galaxies and nebulae are very far away and very large and so with this wide-field imaging (or observing), higher focal length and magnification are not helpful as you will only result in capturing narrow sections of the sky.

In terms of metrics, a 2x Barlow Lens will also double your focal ratio (and a 3x will triple it). This means a slower aperture that will degrade imaging.

Can you stack barlow lenses?

Yes, stacking barlow lenses can be done to further multiply the magnification.

Remember though, you may exceed your telescope’s theoretical limit, adding the extra component will further dim the view, and further increasing the magnification with also increase any distortion and so you will not necessarily end up with better views doing this.

In summary, when buying a barlow lens you should do some assessment of your telescope’s theoretical limit and what eyepieces you currently have to work out what is best for you from 2x, 3x, 5x etc.

In terms of different models, the more expensive premium ranges from Televue and Celestron will give you better optics and will be worth it if you have good-quality eyepieces.

The cheaper Celestron barlows may be ok if you are just playing around with a lower aperture telescope and the eyepieces that came with it.